I had the opportunity to take Combative Weapon Solutions (CWS) Low Light Tactics class here in Houston. CWS is based out of Austin Texas but travel around Texas bringing reality based training to their students. This was my seventh class from CWS. Next, month I will travel to Austin to take an AK class from CWS.

I shoot for fun and compete in IDPA pistol matches. I am not a Tier 1 Special Operations Ninja. (Although I am super high speed in the dental world!)  I am a Father and have an innate obligation to be the protector of my family. I have a CHL and carry a Glock 19 daily.  I am not a paranoid tin-foil hat wearing crazy. I am highly educated and have an amazing family and career. However, I understand that bad things can happen to good people. 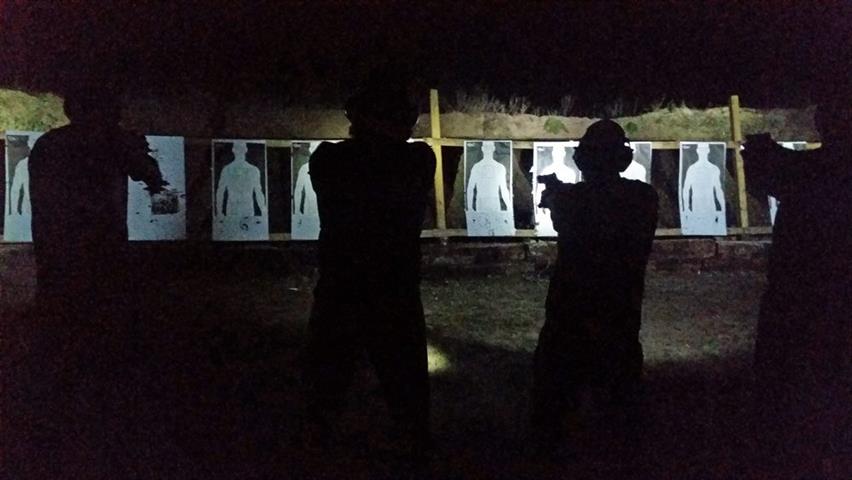 Unless you have lots of land in the country it is very hard to practice shooting at night. Therefore, any chance I get to shoot at night is a great training experience. I had taken a CWS and Dark Angel combination class last year. It included a night time shoot. Since then CWS has upped their training game. They went through the training, certification, licensing, and insurance in order to bring simunitions to their students. Simunitions are non-leathal projectiles fired through service weapons through some type of conversion kit. Basically, simuniitons are like paintballs on steroids fired through normal looking common weapons. Also, CWS incorporated the SIRT pistol (laser training pistol) to their equipment list. 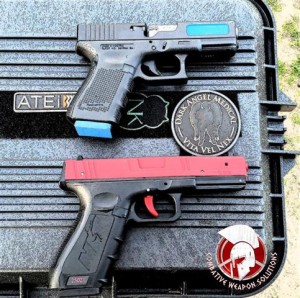 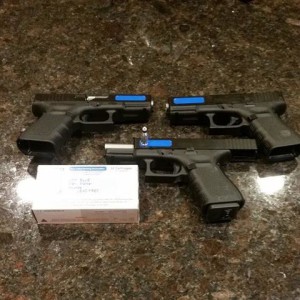 The Blue Guns are the Simunition Guns and the Red Gun is the Sirt. 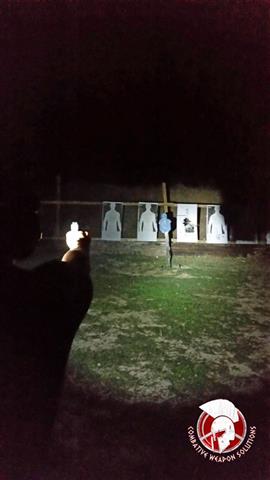 We started in the afternoon and went over the usual: instructors introduced themselves and then the students talked about who they were. Then to some basic shooting on the range. This was NOT an Pistol 1 or 2 class. Students should have been familiar with “the basics” of pistol marksmanship. The instructors condensed a two day beginners pistol class into about 40 minutes. The super highlights of stance, grip, sight alignment, trigger control and reloads were addressed. Although all of this was elementary to me. However, I know the instructors needed to do this so they could watch and evaluate the shooters. Nobody wants to be shooting with a student that is doing the basics unsafe.

We then went over the different flashlight hold techniques. Then back to the range to practice the different holds. Next we worked on shooting steel from various distances utilizing the flashlight.

Low Light/Night Time: One can not predict when bad things happen, so the probability of finding yourself in a situation that needs to be addressed at night with or without the use of force is pretty high. But rarely are there opportunities to get that practice and training in that environment until now. Having worked the streets and hostile environments, we understand the importance of regular low light and night time training. The dynamics of a dark environment adds additional problems which are not encountered in normal daylight or lighting. The environment in which the light source will be used in, the type of light (hand held or weapon mounted), different techniques, as well as a breakdown of ones shooting fundamentals while employing such devices all adds to the complexity of low light/night time tactics and skill applications. This is where learning how to properly employ such devices and gaining experience in low light environments can make the difference of effectively taking care of a problem or becoming a liability.

Prerequisite: Pistol 1 or equivalent from a credible instructor at a minimum highly recommended.

Once again, this class was not a Pistol 1 class but a Tactics Class. There was not a ton of life fire shooting. Where this class really excelled was the different “scenerios” that students ran through the Shoot House. Students went through the Shoot House first with the SIRT laser pistol. Then it was time to turn the action up to eleven by using the simunitions! (obscure reference to Spinal Tap “these go to eleven” )

The Lead Instructor Lee had contacted me about being a “bad guy” during the scenarios. CWS  wanted to bring down five instructors to run the class but one instructor could not make it.  CWS knows me and felt comfortable with me being a role player. It was a unique opportunity to see action from different points of views. I got to be in the scenarios for the SIRT laser and Simmunitions scenarios.

I must give major praise to Instructor Chris. He was running the students through all the scenarios. He was very tough and challenging. When a student would fumble or employ poor tactics Chris was instantly all over the student. Yelling, shouting questions, telling students what they need to do. All of this was done to “motivate, challenge and provide stress” to the student. The low light room clearings were done in a controlled environment. Heaven forbid IF the student ever has to do this in real life there will be major stress involved. After the scenarios Chris was still extremely tough and critical of the student. Chris would aggressively ask questions and point out where the student went wrong. Then when this “stressful interrogation” post scenario was about to break down and be of no use to the student Chris would instantly turn into Mr. Compassion. Talking gently, being supportive, giving encouragement and praise to the student. I’ve had hundreds of teachers throughout College and Dental School. It is very easy for me to tell when a Instructor is passionate about the subject material and wants the student to excel. It was pretty awesome to witness Chris teaching.

My first run through the Shoot House using the Sims Gun was a pretty poor performance. The huge protection mask I was wearing instantly fogged when I entered the room. Everything was opaque and I could not see. I freaked out, used poor flashlight tactics, forgot to reload and cleared the next room with only 3 rounds in my Sims Gun. It was pretty pathetic. I got shot multiple times.

Round Two with the Sims Gun.

I had been in the house being a bad guy then a “no shoot by-standard” so my mask was no longer foggy.  I was the last student to go through the last Simmuntion exercise. I entered the house and instantly closed the door so I would not be backlit. I worked the flashlight in the hallway randomly lighting up both door thresholds.

Here was the configuration of the last Simuntion scenario.  Door is red. Black circles are the bad guys and the green circle is a hostage. The Instructors were yelling at me before the scenario that they were going to change it up and get me good. My last run through was the first time the instructors used a hostage. There was a “punching dummy” in the house that Instructor Lee dragged out into the room. 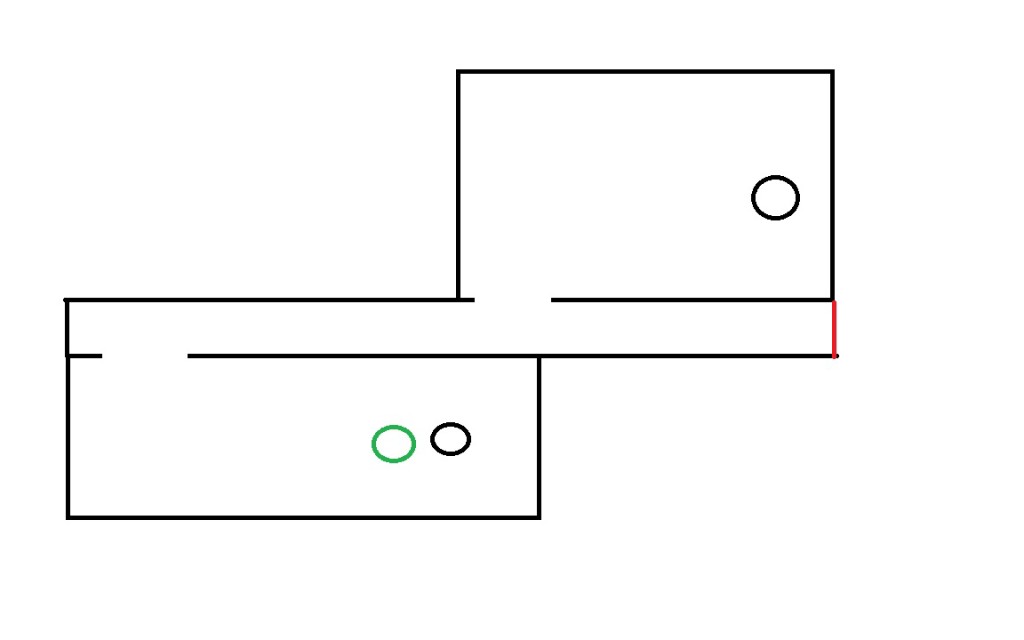 I used the techniques and cleared the first room. I got off 5 shots on the bad guy before he could even react. I did my secondary and tertiary search in the room. Everything was clear. I reloaded my magazine. I hear Instructor Lee in the next room yelling vulgarities, challenging me, and trying to intimidate me. He is yelling “I got your kid, come get me punk.” No worries, not going to let his verbal trash talking effect me. I am in control of the situation. I used the tactics I was taught and knew Lee was behind the hostage. Lee was standing to the right of the hostage, the gun was on the right side and there was no furniture or obstruction leading up to the Lee. I moved into the room under darkness. I swung way wide and to my right. I wanted to get a better angle to shoot. I literally got within 4 feet of Lee before I turned my flashlight on and started shooting. I got 5 shots off as I continued to advance on Lee. I really wanted to make absolute positively that the hostage was not in my line of fire. I “lighted” Lee up and he did not get a single round off. Plus, I did not hit the hostage.  I scanned the room and made sure there were no more threats.

On the post scenario briefing Lee was thinking that I was going to enter and come at him from his right side. Lee said he did not see ANYTHING until I appeared on his left and by the time he registered where I was at he had already taken 5 rapid shots. It was pretty dang cool to run the second scenario, use good tactics, shoot the bad guys and not take a single shot.

A great low light tactics class from Combative Weapon Solutions. This was my first time using Sim Guns and it takes training to a new level. Can’t wait to get back and train again with CWS.