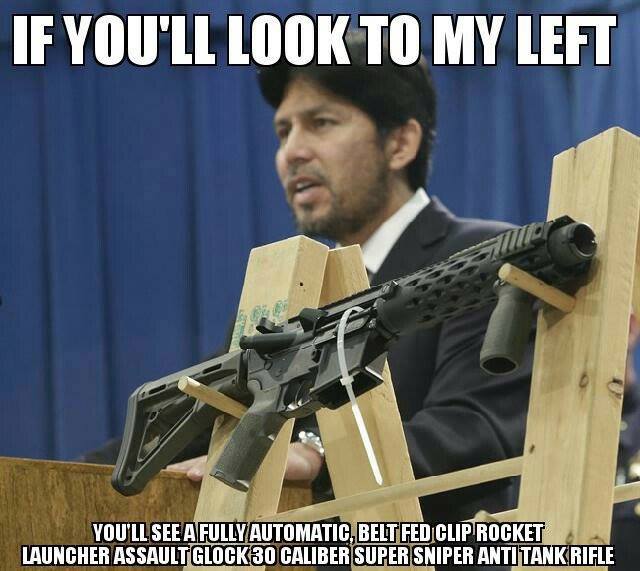 When I first started riding Dirt Bikes I wanted to get involved in the sport. I soon realized that there were organizations trying to close riding areas all across the United States. I started to donate money to Pro-dirtbike organizations that were fighting the land closure groups. I want my daughters to be able to ride dirt bikes one day if they want.

When I started shooting a couple of years ago I decided to also support the groups that are fighting to preserve the 2nd Amendment. I am a lifetime member of Texas State Rifle Association and the National Rifle Association. Furthermore, I am also a Endowment and Benefactor Member of the NRA.

The assaults on liberty, freedom and the 2nd Amendment are overwhelming. Lawmakers that have no idea about guns make stupid claims about guns. See the Video Below:

I understand why the 2nd Amendment was put in place.

I am no gun-nut, conspiracy theory, tin foil hat, end of the world doomsday gun. I am a family man, father, husband and law abiding citizen and dentist. I enjoy going to the gun range and I even compete in pistol competitions. I am not a hunter (I can’t kill a deer). I am a simple law abiding citizen. I am no Navy Seal, Marine Force Recon or Delta Force Operator. I will never go looking for trouble. I have my CHL but that has only made me more aware of the need to deescalate confrontations and to retreat to avoided problems. Having a gun does not make one macho and strong. A gun is simply a tool. I use my tools for recreation and competition.

I pray I never have to use a gun to protect my family. I pray the house alarm going off once a window is smashed or door kicked in makes a would-be robber flee.  However as a Father and protector of my family, I have already made up my mind to use any tool necessary to protect my family.

When it comes gun control there is always the “we need gun control for safety and to protect children”. If that was the case then let’s put every DWI person in jail forever, lets limit cars to only two cylinders and 35 mph, lets ban knives and blunt objects. This would save lives!

On December 14th , 2012 I was working at my dental office. I had paperwork to do,  bills to pay, lab cases to check and insurance denials to fight. I was planning on spending my Friday working on paperwork.  Then the reports of Sandy Hook came out. I got sick to my stomach and was nauseated. I was sickened by the evil that transpired. I was sickened that there was a  sub-human coward that would hurt children. I left my office and drove home so I could pick my daughter up from Kindergarten. I gave her the biggest hug when she came out of school.

But enough of my ramblings. Here is an excellent rebuttal to the clueless Senator from California.

My name is Matt *****.  I am a full-time deputy sheriff and have been so employed for 17 years.  I am a court recognized firearms expert, a lifelong shooting sports enthusiast and in my spare time, I write firearms and firearm related gear reviews for several media outlets, both online and print.

I am writing this letter as I attempt to sit through the YouTube video of your recent press conference given on January 13, 2014.  As someone quite knowledgeable about firearms, I find it extremely difficult to listen to your presentation because almost nothing you said about these “Ghost Guns” (a term you used repeatedly that I have never once heard before) is factually correct.

I would like to try and both educate you at the same time as I dispel with the lies and obfuscations you presented to the media during that press conference.

You assert that assembling a complete, functioning AR-15 from a legally purchased 80% lower is a simple task.  I myself have completed that task, but I am not the average American.  I have a well-equipped shop with all the necessary machinery, and the knowledge to use that machinery, in order to complete the lower receiver.  You make it seem that any fool with a drill press can complete the task, which is a vast oversimplification.

I challenge you sir, to put your money where your mouth is so to speak.  Show me how easily, you personally, can complete the machine work on that raw lower receiver forging you held up, and assemble a working AR-15.

The incident in Santa Monica that you mention, while tragic, is not evidence of any great crime streak or rising criminal trend in which “Ghost Guns” are being employed.  To my knowledge, that is the only incident the State of CA has experienced where a firearm built on an 80% lower was employed to commit a homicide.  Please, correct me if I am wrong on that matter.

Finally, while I am not surprised at all that you would have a member of the Brady Campaign as a supporter while you are calling for more legislation designed to make it harder for Americans to own firearms, as a law enforcement officer, I am saddened that you used several high-ranking, politically appointed police administrators as window dressing to lend credibility to your argument, as you stood there rattling off complete nonsense.