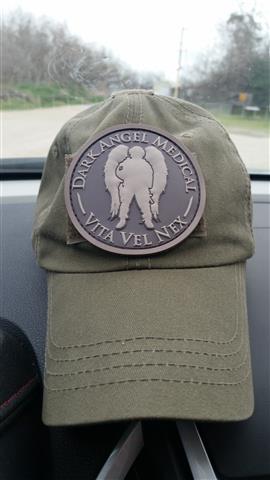 Cold day today. I was one of the first to the gun range so I stayed in my car. I was bored so I decided to take a picture of my Dark Angel Medical path on my shooting hat.

I’ve not shot an IDPA match for several months. In October and November I took my daughters to Austin. I was going to have my sister watch the girls while I competed. Unfortunately, both matches got cancelled due to weather. I had family obligations in December and January and missed the local match.

I was rusty for this match. The biggest thing I screwed up on is my reloads. I was not doing proper reloads like I have been taught. That is something I can practice with my SIRT pistol.

I love IDPA because you have the competition aspect, the stress of the timer and you get to shot unique scenarios at each stage.
It was super cold (for us in Houston that means 45 degrees F) so I did not film two stages.