I started shooting 3 years ago. I’ve got to the point where I realize “It’s not the bow, It’s the Indian”. For 2014 I have decided to buy less guns and spend money on ammo and training. Last December I got a 2014 calender out and marked all the Nugent dates (birthdays, anniversaries…etc) and Dental Classes I had signed up for. Then I looked at about 5 different training centers classes and tried to fill in all the empty spaces in the calender. Then it was time to beg the wife to let me go to the training classes.

I had watched Paul Howe on Panteao Productions and was super surprised to find out he is only a couple of hours from Houston. I really wanted to take classes from Paul. The only class they would sync with my 2014 schedule was the weekend Pistol/Rifle class. The only problem was the Thursday and Friday before the pistol/rifle class I was in Dallas taking an advanced dental surgical class. Surprisingly they wife said I could take the shooting class. I was super excited because I was going to have an awesome time learning new dental surgical skills then immediately go to a pistol/rifle class to increase my shooting knowledge base.

I was looking around on Paul Howe’s website Combat Shooting and Tactics and saw he had written a book: Leadership and Training for the Fight: Using Special Operations Principles to Succeed in Law Enforcement, Business, and War

I ordered the book from Amazon. It came in the mail the day I was to leave for Dallas. I’ve only read a little bit of it but so far the book has been very good.

Heading up to the shooting weekend I was getting nervous. This was a big time shooting school. This was Paul Howe!!! 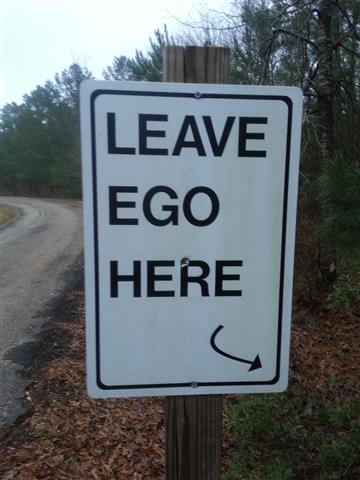 I did not want to be “THAT GUY” in the course. The guy who is woeful under-skilled. I’ve taken several classes around Houston and had several one on one training sessions with an ex-SF who is one of my dirt bike friends. My ex-SF friend told me I would be fine and that I would be better than some of the guys there. I was still nervous.

I got to the class early on Saturday. I was happy to see this sign when I pulled in. I pulled up and was directed where to park. The first day we were going to be doing all pistol.

Time to get to business.

The drills we were doing were part of Paul’s list of standards.  So for each standard the students would get a chunk of information then practice the standard. Then more information building on top of what was presented. Then the drill. The information was coming fast paced. But that is to be expected if you have a super condensed one day pistol training day.

When we walked backed to our gear to load magazines I would try to load my magazines as fast as I could. I wanted to get back to the firing line as quickly as possible so I could watch and listen to Paul. I was paying money to learn and I wanted to siphon off as much information as possible.

Over the weekend when I was done with the course of fire and after I scanned left, right and down and over my shoulders I would watch Paul. I was amazed on how Laser Focused his eyes were when students were on the line.

I barely shoot my AR. Most of my range time is devoted to pistol and working on IDPA skills for my competitions. On Sunday I was nervous getting the AR-15 out. I was running a bone stock entry level DMPS Panther that I put a Leupold Mark 4 HAMR on. It has a fixed 4x scope on bottom and a Deltapoint red dot up top. 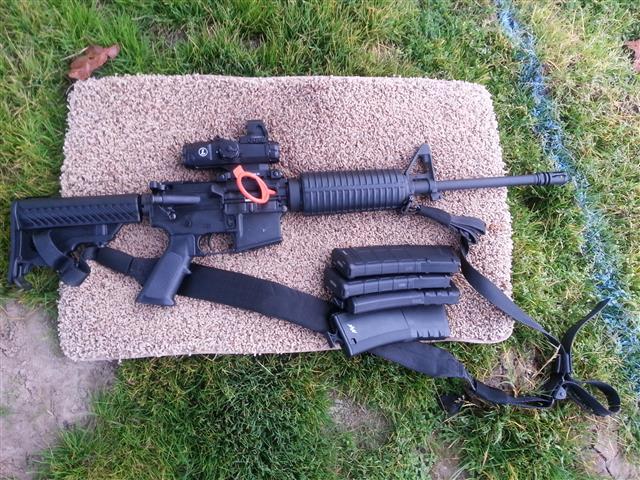 We sighted the rifles in and then got to work. Like on Saturday, today’s instruction would build on the standards Paul has on his website.

One of the standards I was proud to achieve was: start in low ready, on the buzzer drop to prone, shoot 5 shots on one target  at 100 yards in 20 seconds.  We ran the drill on a fresh CSAT target two times in a row against the clock. Then we made weapons safe with chamber indicators and walked the 100 yards. All of my 10 shots were in the “spine box”!

At 75 yards going to kneeling was horrible for me. I shot two stings of 5 shots. Weapons were made safe and we walked down to the targets. I had a large “smile” on my target. I turned around and there was one of the permanent instructors. In my head I called him the Giant Instructor. He was about 6’7. He said “yeah I wanted to see how you shot, I was watching you on this drill. Getting into kneeling for tall people sucks”.  The string of bullets looked like a smile and was translating how much I was swaying when I was kneeling. While we walked back to the 75 yard line Giant Instructor was giving me tips. At the 75 yard line he demonstrated how he got into kneeling and gave me tips on how to correct my position. We did two more 5 shot shot stings starting at low ready and going into kneeling at 75 yards. Weapons made safe and we walked to the line. My 10 shots still made a “smile” but it was WAY more condensed. Six of my shots were in the spine box. Just some simple tall guy advice from Giant Instructor really helped me get my group tighter.

Then we worked on prone again. Giant Instructor watched me again and showed me how I was not holding the grip correctly. I was barely holding the grip so I could get my trigger finger placed exactly like I do when I shot pistol. My grip is just the cheap plastic one that came with the AR. He suggested the Magpul MIAD. The MIssion ADaptable Grip is a offers three interchangeable rear straps to accommodate all hand sizes and two front straps; A2-style and A1 (no finger shelf) style. That way I can get a good grip and have my finger in the proper position. 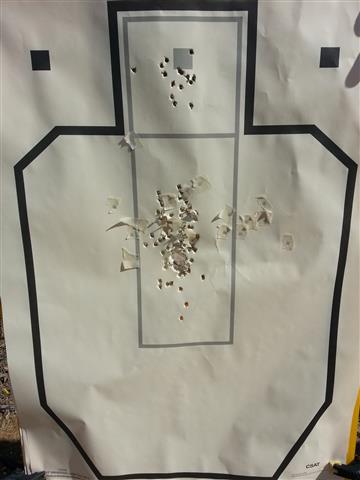 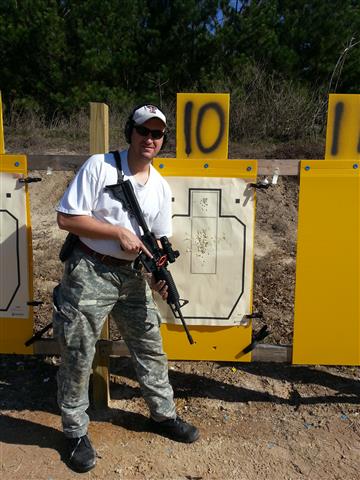 Paul then had us work on the standard— Low Ready 2 shots /2 targets 7 yards 3.00 sec. Most of the students were off line and the student instructors where behind the active shooters with shot timers measuring the time. Then new shooters would go to the line. As it turns out I was to be the last shooter that needed to have a turn. Therefore, I have Paul on his speaker system giving out the commands and I am the only shooter. Everyone is watching me. Paul has his LASER EYES directed towards me! “Shooter standby……BEEP”. Raise the AR, get sight picture BANG, sight picture BANG…transition to next target with finger off trigger…sight picture BANG, sight picture BANG…get another sight picture. Scan left, right, down, search over the shoulders, weapon on safe. “Shooter standby…..BEEP”. Same thing raise the AR…..

I had done the standard several times. This time I raised the AR up on the first target Bang-whoosh. Last round, bolt locked back. Immediately switch safety on. Left hand clearing AR out of the way. Right hand going for Pistol. Grab the pistol, bring pistol out. Left hand meets up with right hand. Punch out. Get sights on target. CLICK (we had pistols dry)—click and no boom. More training. Hit the bottom of the magwell (mag was out but still went through malfunction drill) rack the slide and transition to the next target. Sights on new target, pull the trigger. Click, tap rack, sights on target and pull trigger again. Click, tap rack…..scan left,right, down, look over my shoulders. Then holster the weapon.

That was the end of the day for training on Sunday. Paul is the definition of the silent professional. However, I hope behind his professional stare he was thinking “good job dental dude!” I know if I was military or LEO and my rifle went dry or malfunctioned and I had to go to my secondary weapon it would be a very bad day. However, for this civilian dork shooter a rifle to pistol transition is pure testosterone awesomeness!

Excellent quality instruction from Paul, his CSAT instructors and the Student Instructors. I got several very precise tips to help me become a better shooter. This was a fast paced class with high volume information being thrown at us in just two days. I had a chance to talk to Paul a couple of times before class, during lunch breaks and after class. Paul is a genuine, nice, no-ego , stand up guy. I am so excited to have such a High Level Instructor so close to Houston. I already have all of 2014 scheduled for training classes. However, for 2015 I am going to try to take multiple classes from Paul Howe. The level of instruction was world class and even though there were lots of shooters I got a lot of personal one on one help.  I was very honored to have had the opportunity to learn under Paul. 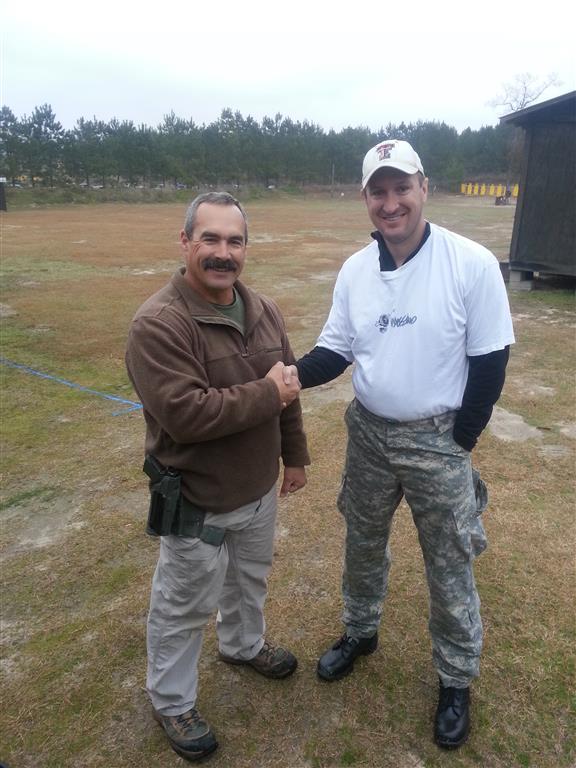